First, thanks to StuR328 for sending me a sample pot of Chemical Guys Lava along to try out. Much appreciated!

Chemical Guys bill Lava as a "luminous glow infusion paste wax". You can read all about it here, applied by a scantily clad chica with as many curves as the car she's working on: http://www.chemicalguysuk.com/Chemical_ ... p/lava.htm ... more perviness later 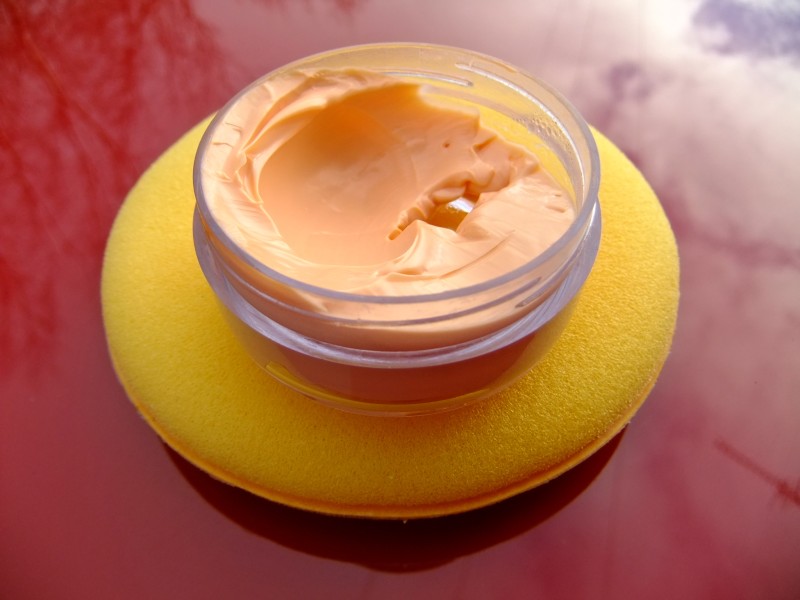 Scent? Texture? The first thing we all do with a new wax is smell it. Then, we usually rub a finger around the top of it and feel the texture.

I cleaned down the bonnet on my 9-5 Aero with some Serious Performance Paint Cleanser, buffed up and then applied the Chemical Guys Lava with a round yellow sponge pad, which I loaded up by spreading some of the wax over the pad gently with a finger. The damn thing almost leapt out of my hand when it touched the paint - grabby!

Getting the wax on the paint was a bit of a trial - you seem to need quite a lot of it as it doesn't spread well, but you do get a long play time to spread it around and work it in. I think this is one that benefits from a small circular application, which I did and then evened up in stripes. It it difficult to see once on the paint, but not difficult to see where it is spread so long as you drop down to a shallow angle.

Back to seeming to need quite a lot of wax - I had to re-load the pad a few times even for just a bonnet. This did lead to high points, but upon removal I was not punished for this.

More perviness? Kind of sick, but I had "it rubs the lotion ..." going around in my head as I applied it

That's a 'Silence of the Lambs' flashback for those wondering what the heck is he on about?

Here, we can see it curing: 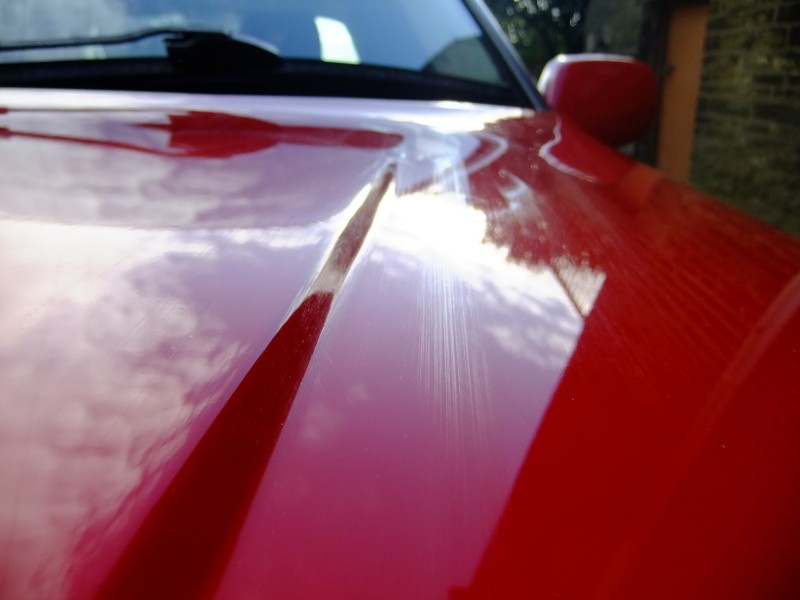 Cure time is quick, and the "swipe test" showed it ready to remove within a mere few minutes!

Buffing was a lot easier than application. Little effort needed and no need to go back over any areas. Even areas showing high points came off without much effort and didn't leave sticky ridges as some waxes can when over-applied. 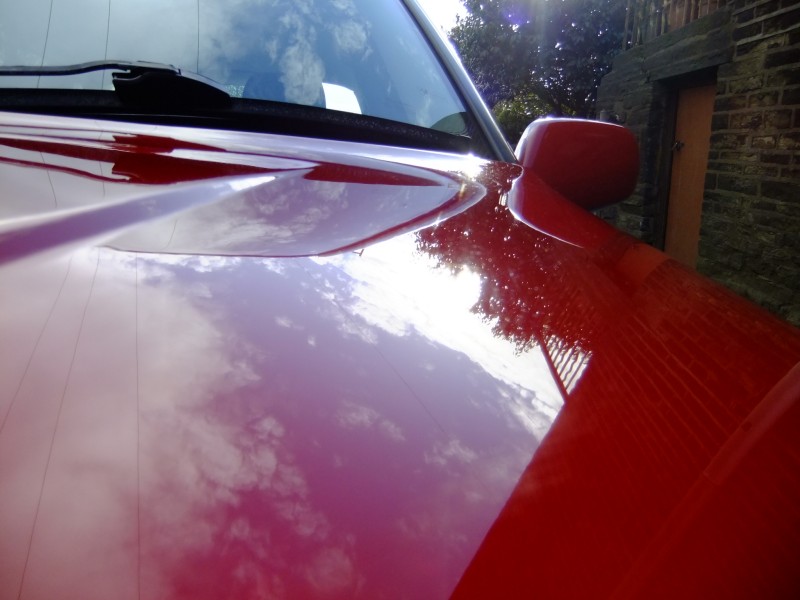 The bonnet side by side against the wings and doors was no more glossy. Even when the sun hit it, it did not seem boosted. Dodo Juice Supernatural Hybrid, by way of comparison, literally put that red paint on steroids and on the black car had even my wife asking what was different about that one panel. Chemical Guys Lava did not seem to produce the same effect.

I may have captured something here: 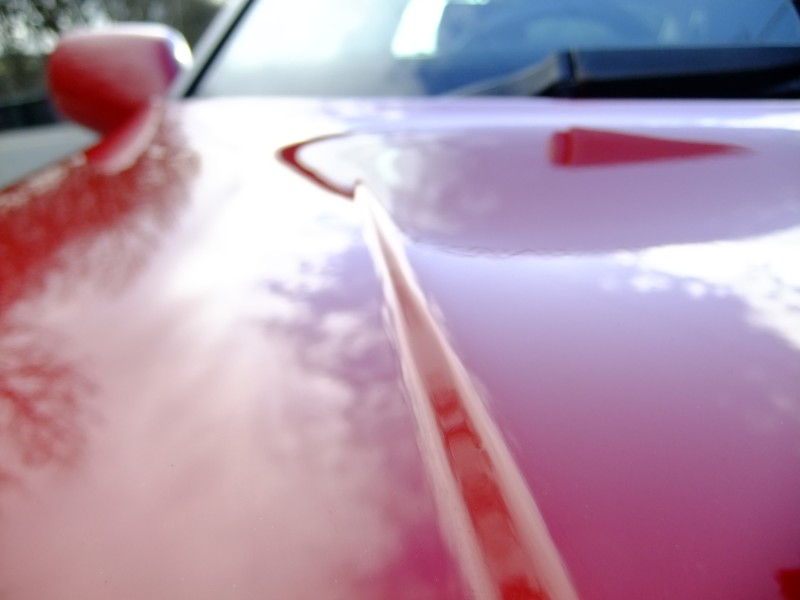 ... showing the structure of the paint boosted up. Perhaps on these low angles, the light is less coloured, more white light and so the luminous effect might not be nonsense. By filtering out how much colour is reflected back can give a more glossy effect.

From a normal vantage point and a steeper angle, it looks pretty much like more other waxes although clarity is very good. 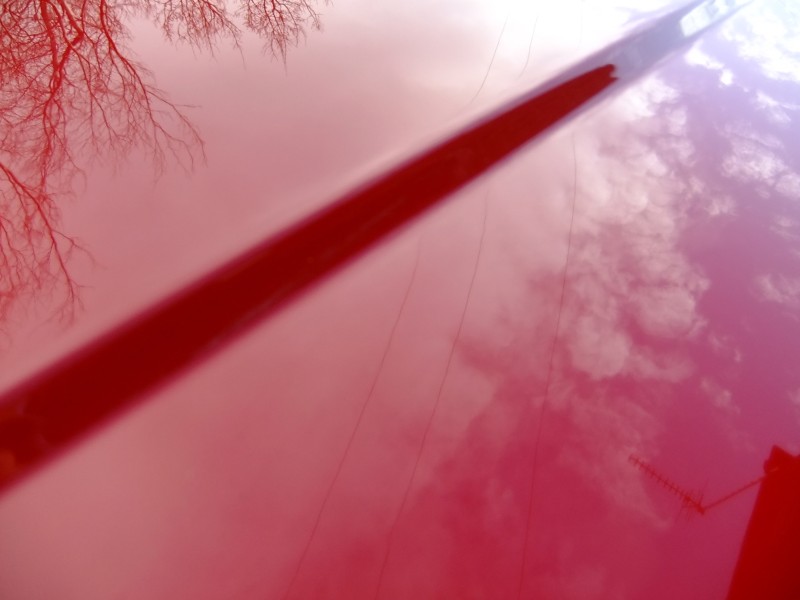 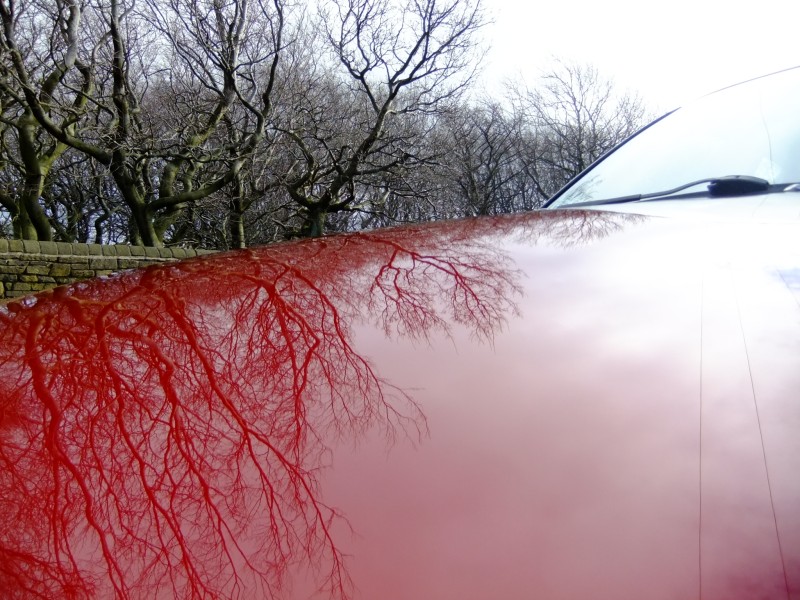 Price pitches it more expensive than many pots regarded as more special and starting to creep towards low end boutique waxes bought more for the name than empirical performance. If this is a genuine new technology from Chemical Guys, they are going to want to capitalise but in the end, this does not feel, look, smell or work like a £50 plus wax.

In summary, not so much fun to apply, perhaps requiring more than harder paste waxes but certainly less than liquid waxes, absolutely effortless to remove and a very pleasing look. I don't think the wax, the packaging or the experience would make me feel all that special about owning a wax of such price and that is perhaps its main let-down. Fun to try, nevertheless.

as i was reading this interesting looking article i clicked on the CG link, well i was shocked to say the least.
There is just no need to display video footage of a beautiful,svelte young lady dressed only in what appears to be a skimpy bikini top and tight lace panties,just no need at all.
Sorry did someone mention a new kind of wax? i got a bit distracted there for some reason.

No seriously,excuse my schoolboy humour.
Very good review but it must be hard to see any improvement on your Saab's as they look in such great condition to begin with.I guess if you can't see an improvement over other waxes then that says it all really.
I suppose it just goes to show the power of advertising with some products.I wonder if the results would have been better on some old,tired paintwork?
Is it just me or does this "glow in the dark" idea sound more like a DJ product(not that im knocking DJ stuff at all).
Suppose it might be more attractive at a lower price perhaps?
Top

Your car had the perfect paint prep to fully test the wax and to compare it against what the marketing bumph said.

Of the two reports I have read about this, it does not live up to the hype, is difficult to apply and is over-priced. Would the finish it achieved be comparable to a cheaper wax like a DDJ or even CG Butter Wet? Not from what I have seen.

I think that I will give Lava a very WIDE berth.
Top

I use BWW for my go to wax for when doing friends cars and I really can't complain. It's good stuff especially for the price.

si - Yeah, the Dodos could well have come up with something like this as a special edition.

Willington - Chemical Guys have a seriously solid range of quite excellent products at reasonable prices which never fail to satisfy, impress and make the task of car detailing a joy! This wax doesn't quite sit with that statement. On a personal note, I would be disappointed with the product having spent that kind of money. At £20, I would have been perfectly happy ... but would have bought either a liquid wax or a harder paste wax to replace it.

The finish does look good! The ease with which it came off was welcome. I think a sort of deeper Chemical Guys Wet Mirror Finish is possibly the closest I've seen from that stable - I've yet to try some of the new formulations, like Blacklight. Lava seems to be the opposite of Blacklight, which deepens the look by reducing gloss and thereby amplifying the reflection of colour (or lack of colour), whereas Lava loses all depth to boost the gloss ... I think by deny reflection of colour. They're doing something pretty clever with light altering polymers anyway.
Paul

can't believe I missed reading this

have you had any decent beading with it yet Paul?


I think its more a wax for the drier sunnier countries.
Top

Having applied it on the Sunday and with overnight rain, the beading was quite misshapen when I got into the car ... indicating dirty rain more than anything. Driving to work in the rain, but the time I got there, the dirt had been washed off by speed and more rain and the beading was very nice indeed - upright pearls! That shows good behaviour - cleaning up in the rain is good. The earlier snow today has now melted and the bonnet looks pretty good!

I usually reserve my judgement on beading until after the first wash now, finding that to be a good test of a well cured product. I've not got around to washing the cars this weekend, but I've got Friday off, so maybe then ... I'll get some snaps.

In summary, I found it actually quite hard to apply despite the demonstration showing it to be really easy. Thin, almost imperceptible layer applied. Removal was utterly effortless. Initial beading was good. I'll grab some snaps after the first wash.
Paul

looks like a liquid wax just poured into a jar. i know less is more etc, but realistically how long can that last versus a harder wax?

i need to try this!!

OcaToro wrote:looks like a liquid wax just poured into a jar. i know less is more etc, but realistically how long can that last versus a harder wax?

i've been recently thing about this one paul, i wonder how the lava would sit on top blacklight??

Luke88
The wise speak only when it is necessary.
Top

Sorry, I didn't like it, didn't rate it and can't recommend it.
Paul

Sorry, I didn't like it, didn't rate it and can't recommend it.

The wise speak only when it is necessary.
Top
Post Reply
14 posts • Page 1 of 1