My tin of Collinite 476S is well used, so well used that I can see the bottom of the tin in the middle and there is still loads of product up the sides. Wouldn't it be nice if it was level again for me to run my pad around?

I've had the Blue Velvet Deodorant thread in the back of my mind for some time now and always thought that this method would work well just to re-settle waxes once they're used ... well, guess what ... it works

I think my only comment is not to rush the process and keep the water temperature hot, but not boiling. For waxes with solvent cleaners in and any petroleum spirit content, go careful - petrol vapour is combustible. That's not too bad on an electric stove, but if you're on gas then turn out the gas before putting the pot into the hot water - the hot water will melt the wax. For cooling, just let it set in room temperature or as shown above, force chill in a pot on cold water.

Anyway ... you, know me. I'm never happy with a product as it comes to me, in a tin as the manufacturers intended and so high on petroleum vapours, my daft old brain got to thinking ...

I have a small amount of Sonax wax (which is a very soft wax, almost like Vaseline in consistency) and while that it nice to use, it does not seem to last at all long and well all know Collinite does. We also know Collinite could be a little easier to use and Sonax is certainly easy to use - just wipe on, cure and wipe off, no hard buffing. You can see where this is going, can't you 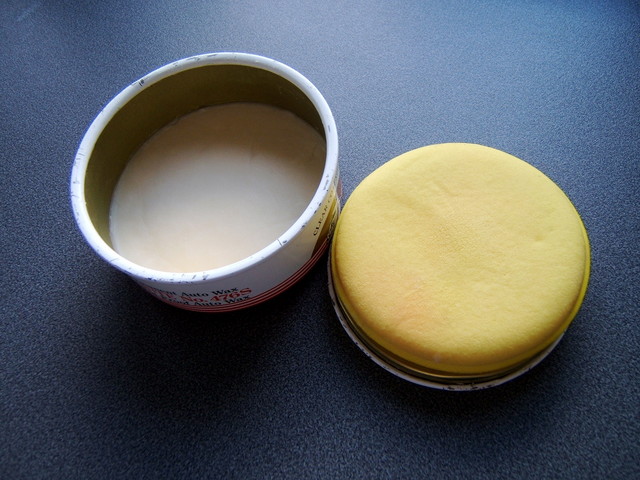 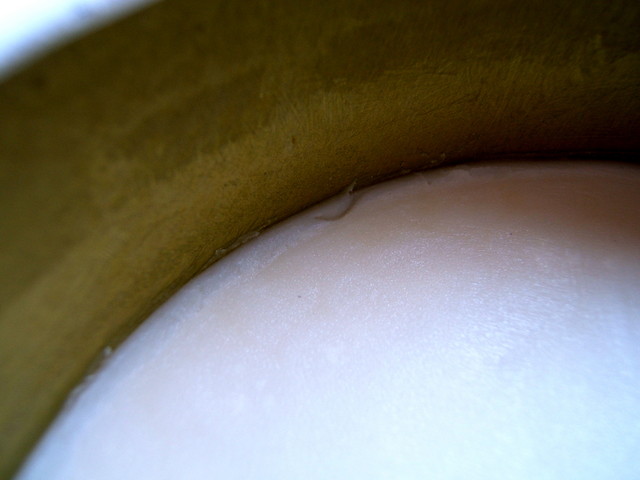 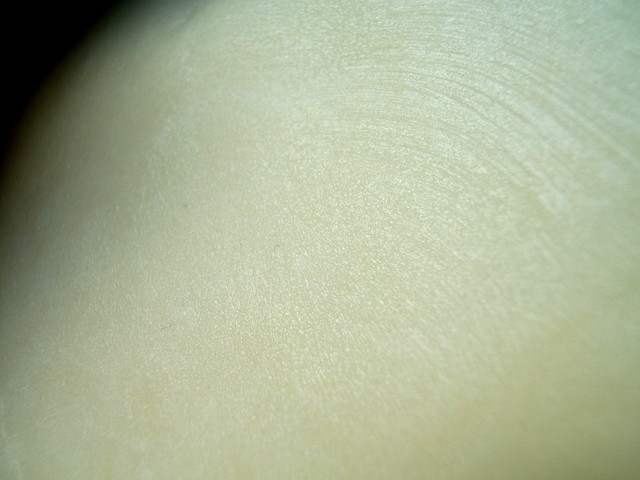 Yes, it has set perfectly ... no separating and no slushy texture. Just right

Running a finger around inside the tin it now has the melting feel of 915.

What's it like to use?
Well, it spread really easily and I think the oils in the blend improved upon the Collinite base to give some levelling properties, disguising surface marring and light swirls. I know Collinite can do that to a degree, but Sonax does it a lot better - I think I've imparted some of that goodness into the wax. Left to cure, it wiped off with incredible ease

Time will tell me if the properties I associate with Sonax remain for more than a week, or two in which case I think I can safely say I've improved both waxes 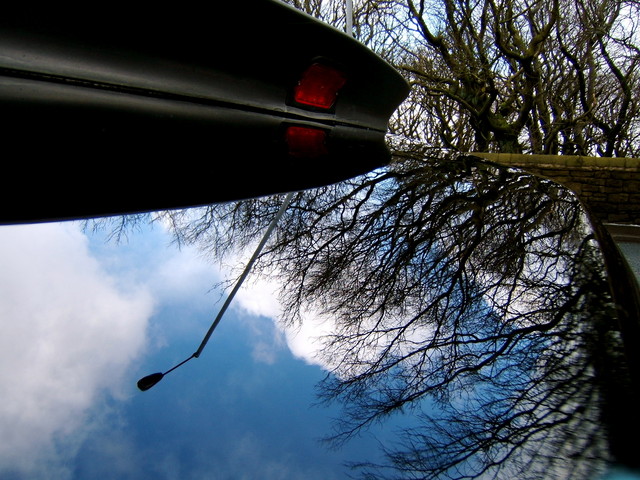 Hopefully you can see that this is a little darker than Collinite 476S would be. It remains bright and glossy, which is what I would expect of Collinite 476S, but has a depth that I would normally associate with 915.

So, why bother when the end result is like Collinite 915 anyway?
... for the fun of it, of course.

Will I do this again?
... almost certainly not! Thanks for reading.
Paul

Brings to mind men in sheds (James May)

So when is this wax (Sonanite) going into full production

Actually, 'Sonanite' is quite a cool work, kind of like some new-found element - akin to Kryptonite

Well, if the end user license agreement for both waxes does not include a clause whereby I cannot re-work either wax to my own needs then the lawyers can go hang. Of course, produced and sold that would be another matter, but you have the recipe ... have fun ... don't blow yourselves up

This is the sort of thing I love about this forum, bringing fun and interest to us all.

I now frequent CYC more regularly than 'the other place' because the guys and gals here are just so much more normal.

freon warrior wrote:This is the sort of thing I love about this forum, bringing fun and interest to us all.

'aye ... it was a slow Sunday and between showers, I got to play out

freon warrior wrote:I now frequent CYC more regularly than 'the other place' because the guys and gals here are just so much more normal.

I specifically asked to have my account removed from "the other place", if that's the same place I'm thinking of due to a number of off-topic threads that seemed to show up members there as racist and bigoted. I'm glad my account was not removed because I did not appreciate that the normal people over there did not participate in those thread - sadly, they did not back me up either

There's a good bunch over there. The rest, if you can weave between the egos then you'll find a lot of good information - I must say, if I want some information about a new product, I simply google it limited to that forum.

What I MUCH MUCH MUCH prefer about this forum is the camaraderie - we're a happy bunch of detailers from enthusiasts to professionals and we all just get on. I can only remember one cross word in all the time I've been here and I think a lot of that is down to how the off-topic threads are kept free of politics, religion and other divisive topics. My other favourite forum used to be UK SAABs, but the "lounge" there has been nothing but non-stop rant for a good couple of years now and I just can't be bothered.

What I have learned about online friendship is to steer clear of the same topics that you would steer clear of in polite dinner party company. Have your opinions and have your beliefs, but once you start to talk about them online you'll have a big problem getting over the keyboard and the screen at the other end - people will just not get what it is you're talking about.

Here, this forum is about the very wide topic of car cleaning and we do have a lot of fun here. I think of this forum as "hanging out with my nerdy car cleaning friends" and I really do hope we can pull off a national meet-up at some point. This forum stands as a perfect example of what draws people together - commonality; and I would hate to see us start to weave in what drags us apart in off-topic threads.

Blimey! That went on ... you know what I'm saying

I love it here, too. In my usual manner, I spent a lot of words saying so

Damn! Damn! Damn! Happy with red wine, I'm now wondering whether some of the cleaning elements of Collinite 476S could be removed with a little light boiling - if the petroleum content could be drawn off, could we end up with a hard wax version of 845?
Last edited by pjgh on Sun Mar 08, 2009 10:06 pm, edited 1 time in total.
Paul

Could not have put it better myself. As I have said before, you do have a wonderful command of the language and keyboard!

I agree 'the other place' can be very useful for technical information.
Top

freon warrior wrote:Could not have put it better myself. As I have said before, you do have a wonderful command of the language and keyboard!

I agree 'the other place' can be very useful for technical information.

Yes of course you are Ash

freon warrior wrote:Yes of course you are Ash

Cheers mate. I think the detailing info on here is great but the fun side is far better here than "other forums"

Have you got an update Paul? I know it was only a couple of weeks ago but how is it looking?
Top
Post Reply
18 posts